How To Sew A NYB Block

So often I hear folks say that they would never be able to sew a curved seam such as in a New York Beauty block, and are too intimidated by the thought to even try.  In reality, these blocks are not a bit difficult as long as you can sew a good, consistent 1/4" seam - as in straight patchwork.  I took some pictures of the process for Marg  a couple of weeks ago and thought that I would retake them and tidy them up a bit for posting here when time allowed.  (ha!) Since there are no more hours in the day in 2013 than there were in 2012, I have decided to post these and ask you to forgive the crooked shots.

The block below is the same one used in Roundabout Again.  I have my regular 1/4" piecing foot on my sewing machine.  In the picture below, the space inside the green tape measures 9-1/2”, the unfinished size of the block.  You can see that the pieced foundation arch reaches to the 8” mark on the mat.  Since this arch is foundation pieced, you know that it is the exact size it should be;  use it as a guide to line up  the edges of subsequent block sections.  After you have stitched the spikes and carefully removed the foundation paper, stay stitch 1/8” from both curved edges.  No doubt you remember stay-stitching from Home Economics class;  it will not show in your finished work but it helps keep the curved edge smooth in the sewn seam.  Don't fuss over sewing a perfectly straight line, just make sure it is within the 1/4" seam allowance. 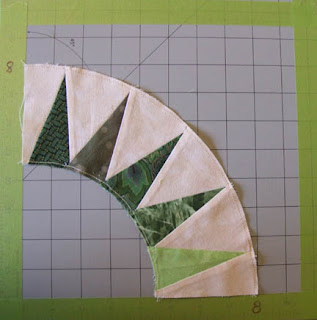 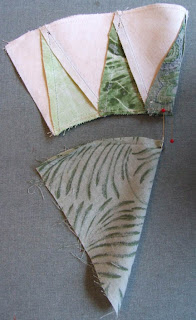 Match these centre points and pin. 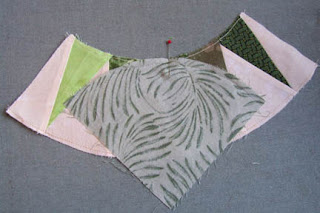 Place a pin at each end. 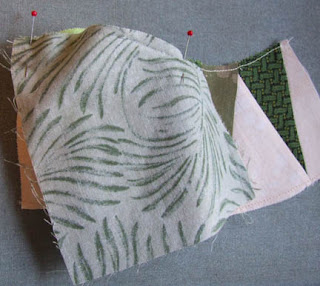 Now...If you look closely along the right hand side of the block, you can see where the centre quarter circle is pulling in.  This is usually where the problem lies in having your block come out wonky.. 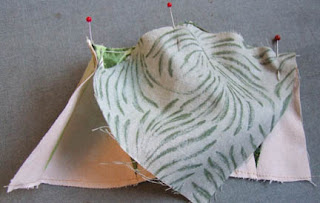 To keep your block true along the edges, pin down both sides at the end of the piece you are adding.  I flipped the patchwork over in the picture below so you can see that I am pinning down along the edge of the pieced arch unit.  You will not be sewing along this edge, the pin just keeps the fabric from pulling in as you stitch along the top curved edge.  You will remove the side pins as soon as your curved seam is sewn.  Make sure you pin both edges. 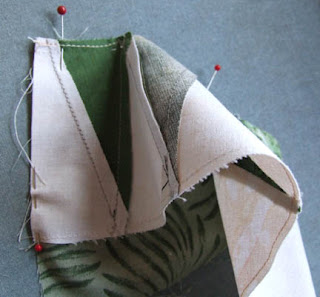 When it is pinned, it will look like this (below).   The blue headed pins are those holding the fabric to the edge;  again you are not sewing that edge, just the top curved edge where the red-headed pins are. 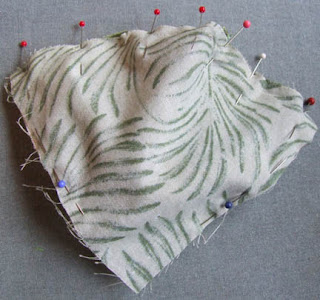 When I am ready to sew, I flip the piece over to the other side.  Even though we were told in Home Ec class to put the fullest side on the bottom so the feed dogs could ease it in, flipping it over to sew has 2 advantages:  the fullness is now on the top, so you can see if you are stitching any tucks or pleats under your needle, and also you can see the seam where the spike ends, so you know that you should not be stitching past that area for your perfect points. 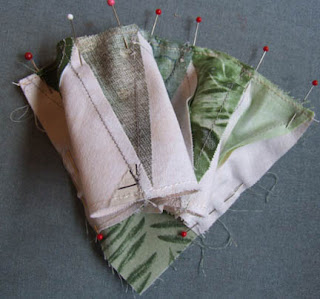 I pressed the seam towards the centre circle, but would alternate the direction I pressed in the adjoining block  You can see how straight the edges are – without trimming. 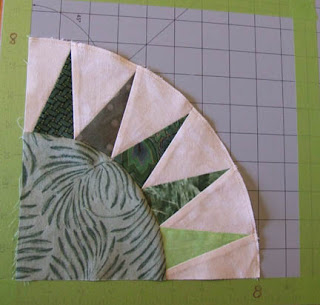 I add the outside arch in the same manner – pinning first at the end of the stitching line, and then along the side of the piece I am adding. (see the white pin along the right bottom side of the red fabric?  That holds the edge of the arch true and straight while you stitch along the top curved edge. 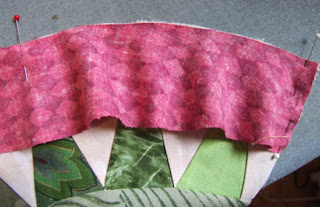 If you have “needle down” on your machine, it’s nice to enable that function;  stitch up to the pins and remove them as you get to them.  Needle down helps keep the fabric from shifting.  Again notice that I am stitching with the fullest piece on top. 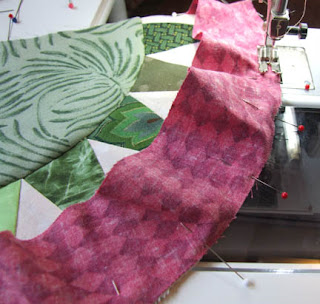 I press this band away from the spikes as there is less bulk.  Despite the rather crooked picture, you can see that the edges of this block have stayed nice and straight and it has come out to exactly 9-1/2”.  (I hate trimming!) For me, the trick is all in that side pin.  For the blocks which call for the background section, I add it exactly the same way. 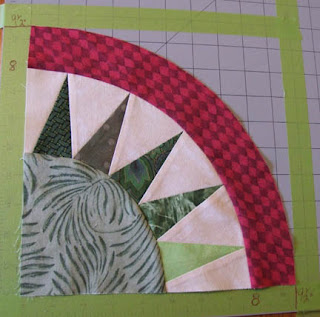