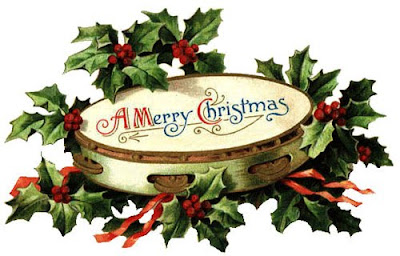 THE DIGITAL STORY OF THE NATIVITY

This morning the mailman delivered an envelope with an unfamiliar return address, from Fredericton N.B. Hmmm...who could it be from? The picture of holly on the front of the card was a bit of a giveaway, as I recognized it from this blog post. It was from Linda. (Can you tell I love holly?) 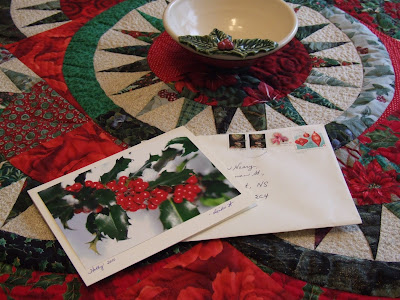 When I opened the card, a little tissue wrapped packet slipped out. I wonder what's inside? 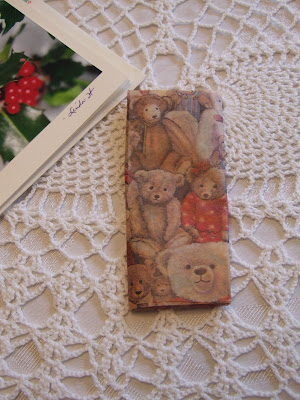 Saint Nick! I had been hopeful of winning this fellow when Linda had a give away on her blog but alas, I was not successful. Well...until now! He is absolutely beautiful, pictures really do not convey how exquisite these sticheries are. 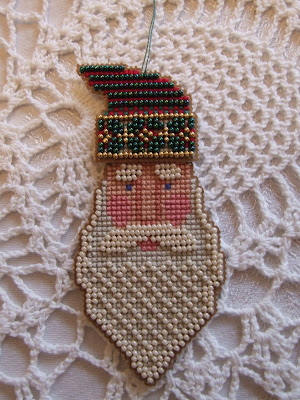 Saint Nick is alreay hanging on the tree. Many thanks Linda for your thoughtfulness, and for providing a wonderful Christmas surprise. 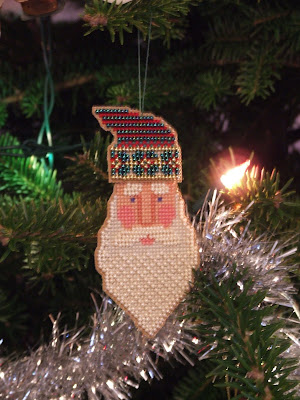 This week in the mail I received a card which caused me to laugh right out loud. It was a group picture of the crew from Shelburne taken during one of the Fibre Arts Festival workshops, fashioned into a Christmas card. 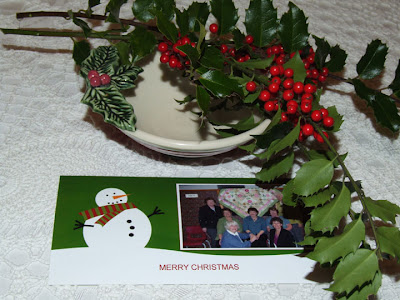 It made me laugh as I had jokingly referred to "our Christmas card photo" back in the post I wrote at that time. Sheila remembered the comment and went to the effort of getting the card made. Thanks so much, Sheila; that's one for the album for sure. Little fun surprises like this are a big part of the joy of Christmas.

In that spirit, here's a little surprise for Rosa from Ohio. Rosa and I have been corresponding about a new design for some wedge placemats to fit her round table. To test the size and the accuracy of my templates, Rosa stitched up this sample with material she had on hand. She was pleased with her results and it will become a gift for a toddler friend. I hope you enjoy sharing your workmanship with the world, Rosa! 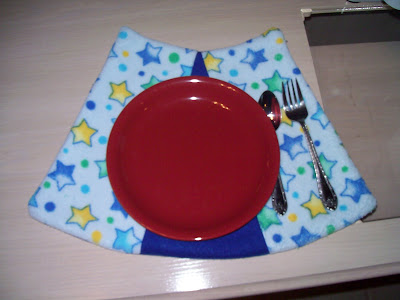 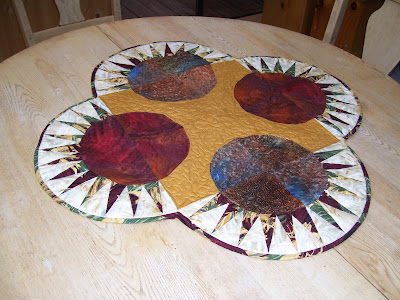 This Maritime Beauty was stitched by Sheila Smith from Cape Sable Island, Nova Scotia. Sheila was part of a spirited vanload of quilters from Shelburne County who attended my workshop at the Fibre Arts Festival in October. Her guild worked on a foundation pieced project last month and that was enough to get Sheila in gear to try her Beauty. The group intends to do more foundation projects in the new year, so we will watch to see the results. Great job on the Maritime Beauty, Sheila, and with the machine quilting. Impressive indeed! I really like when the colours are placed to allow the centre square to stand out; in my eye, it makes a nice foil for the curves and spikes. Please click on "comments" at the end of this post to tell Sheila you stopped by to admire her lovely work.

For the second Sew and Tell, you'll have to skip over to Gail's blog to see her latest Yuletide Jewel.

Edit: 10 am This picture just in from a friend's iPhone, taken at the Nova Scotia Museum of Industry in Stellarton, N.S. It is very cool to see Canadian Heritage Quilting sharing shelf space with two other Maritime quilt classics. How wonderful! 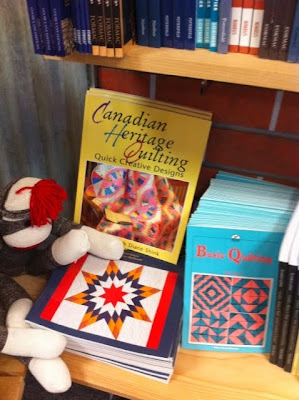 Wrapped Up For Christmas

While most everyone is occupied with wrapping gifts at this time of year, beekeepers have the added responsibility of wrapping their hives for over-wintering. It can be a big chore to prepare for the cold and we have been working away at this over the past few weekends. Today it was time for the tar paper and Tyvek. Each hive is wrapped individually. 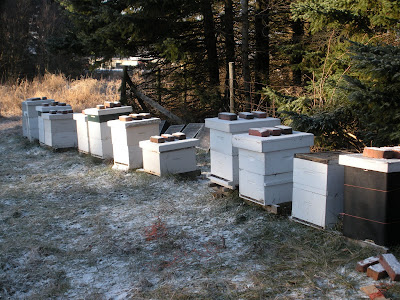 It took awhile to work our way down the line... 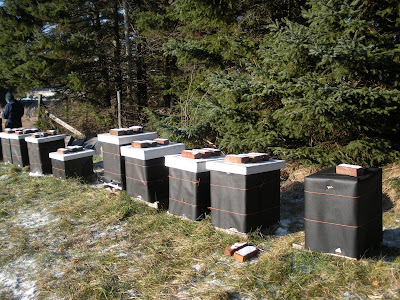 ... but we did it, and all are wrapped snugly for a long winter's sleep. We even added a bit of Christmas for them. 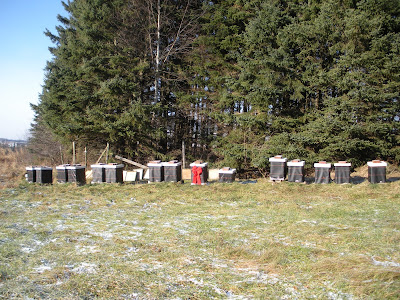 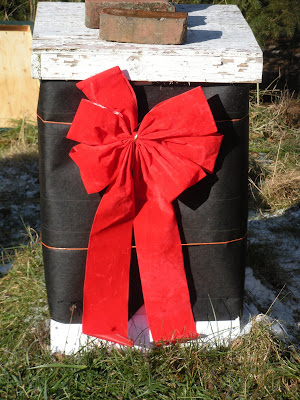 The hive sporting the bow is the Queen Street Swarm which had a very productive and successful season.
Now...on to wrapping the presents...
Posted by Karen at 11:54 2 comments:

Email ThisBlogThis!Share to TwitterShare to FacebookShare to Pinterest
Labels: Bees

Quilting To Rest Your Eyes

Earlier this week my friend Lynn came to visit; she knitted on her thrummed mittens while I quilted. As we worked, we chatted about our approach to choosing what to quilt on a top. As stated in previous posts, I always think of the advice given by an experienced stitcher many years' back: "quilt what you what them to see." With that in mind, I have been stitching gentle, curly swirls on the main blocks of my quilt. What I want seen are delicate, lacy, filigree wings...even though the block itself has no resemblance to wings.

As this is a bed-sized quilt, I am conscious of adding too much quilting; in my mind, there needs to be room left for a little "poufiness". For sleeping, one wants the blanket to have a soft hand, rather than a stiff feel. While I yammered away about "pouf", Lynn shared a different perspective on the quilting issue... but one which produces the same end result. She terms those open pouf spaces, "a place to rest one's eyes" and suggests that over-quilting a piece can be tiring for the viewer. I hadn't considered it in quite those terms before and I found that interesting.
Lynn was working a picot edge on the cuff of her mittens and I decided that would be a nice frilly addition to my wings. 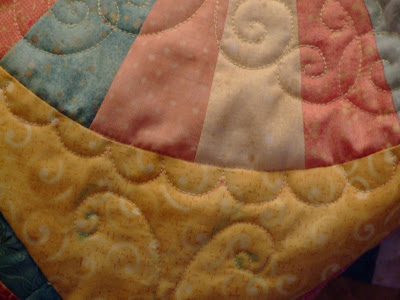 To make the template to keep my scallops fairly even and regular, I traced the edge of the block on cardstock. A roll of tape worked like a charm to mark the semi-circles as it has the centre point identified on the clear dispenser. I just plopped the roll over my line and traced inside the small circle. Then I cut the cardstock with scissors. 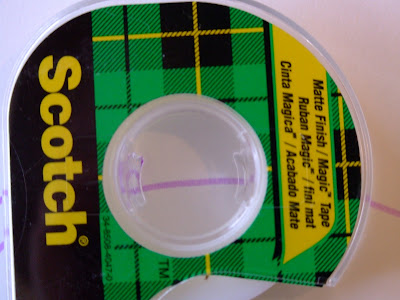 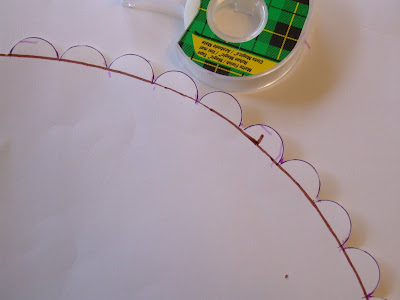 A purple, air soluble marker was used to trace the scallops on the fabric. 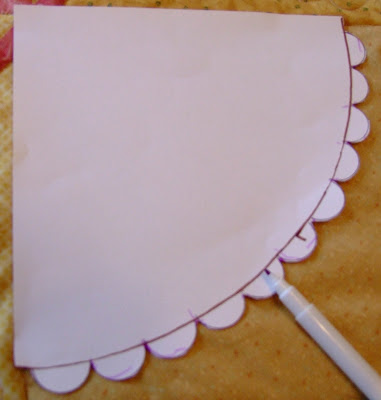 Similarly, a cardstock template was made to mark the scrolls on a curvy line up the centre of the plain border. 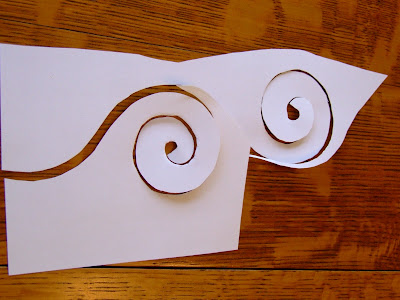 The picots were repeated along the outer pieced border of the quilt, but other than that the wool batting was given space to plump and pouf and look invitingly soft. Hopefully, the amount of quilting on this piece has reached the perfect balance to rest one's body as well as one's eyes.

Now complete with binding and hanging sleeve, the quilt will wing it's way (pun intended) to Quilter's Connection for the spring issue. Once the editor gives the go ahead, pictures of the full quilt will be posted here.