Check out this gorgeous quilt shop in Moose Jaw, Saskatchewan. http://www.quiltershaveninc.ca/ I see Canadian Heritage Quilting and a picture of Log Canada just behind the counter! If you scroll down you will see mention of tin ceilings and 14 foot walls; I'd say this quilt shop is aptly named - a haven indeed.
Posted by Karen at 12:31 No comments: 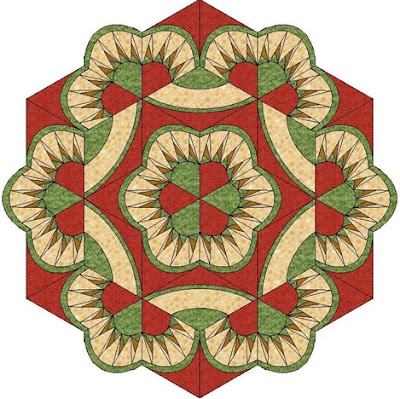 If you are like me, you have more ideas in your head than can ever get sewn. Fortunately, we live in an age where we can use our computers to sew a virtual quilt with unlimited fabric and colour combinations in only a few minutes. For fun, I coloured the Farrago pattern using gorgeous red and green Christmas prints from Moda. What a pretty piece this would be on a wall, table, or under your Christmas tree. Done in cold blues and silver lamé, the spikes look like icicles on a frosty winter morning. I've added a few more shards in the side diamonds on this one: 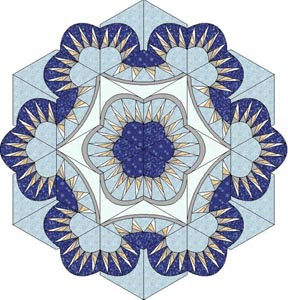 Farrago Pattern # 409 is available on my website. Companion pre-printed foundations will save even more time, as you will be ready to start stitching at once. A month from today is Christmas Eve! 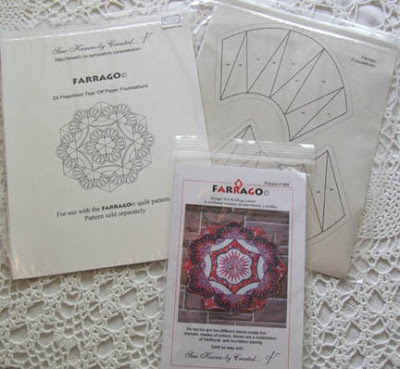 The Christmas season kicked off in Amherst, N.S. last evening with the official town light up in Victoria Square. This is always a well-attended event, and the high school band provided music for a carol sing in the Baptist Church. They sounded spectacular (especially that one playing the big bass drum *-). As usual, the place was packed. As the last carol is sung, the town then heads up the street for a second light-up at Dayle's Department Store. It's breathtaking when the lights switch on in this beautiful old building, whose Christmas décor surely must rival Macy's. Today the festivities continue with the Olympic Torch passing through town and the annual Santa Claus Parade. Lots of Christmas fun!
There was even more Christmas fun in my mailbox, with the arrival of pictures of one of my designs. This is Yuletide Jewel, made by Bev Crouse of The Quilter's Net. Bev says, "it reminds me of those lovely "back in the day" Christmas ornaments. And it was delightfully easy :-)" 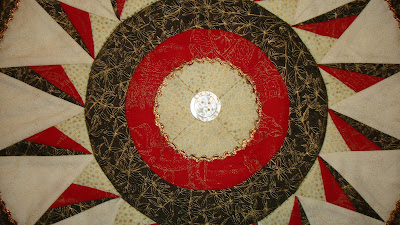 She has added some glittery ric-rac, topstitched around the first circle and a button in the middle. 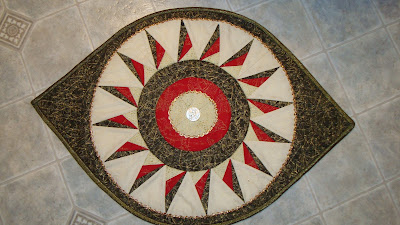 Below is my original version. As Bev says, it is a very easy project as it is only 4 blocks. It's a nice size to hang on a door instead of a wreath. 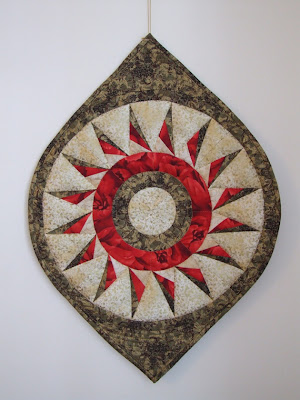 If you'd like to make your own Yuletide Jewel, the pattern is available here:
http://www3.ns.sympatico.ca/sewkaren/patterns.htm
Santa will be arriving later today - smiling and waving and laughing his trademark ho-ho-ho's from atop a float at the end of the parade. I'll be there waving back, hoping he has me on his 'nice' list this year; I sure have something nice on my list...!
Posted by Karen at 08:06 No comments:

Want to Get Published?

I haven't shown much of my own sewing lately, as I am working on something which cannot be shown as yet. It's a piece I am designing for the Spring issue of Quilter's Connection Magazine. Here's some of my fabrics, as a hint: 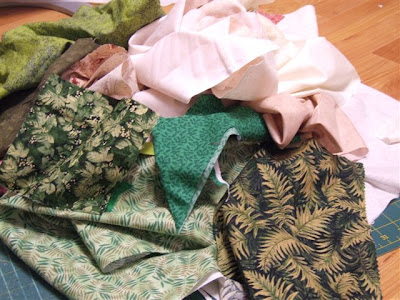 Hmmm...looks like a pile of scraps you say? Green scraps, maybe? If you guessed it's for a "going green" issue, you're correct. My project will be a scrap-buster using small pieces left from other projects. If you have any great tips to pass along on the topic, Heather - the editor of Quilter's Connection Magazine- would love to hear them. This blog post gives details of where you can send your ideas, which will be published in the Spring issue. You might even win a prize!
Posted by Karen at 17:05 2 comments:

There have been a lot of emails this week from new readers unfamiliar with how to access - or search for - older blog posts. I decided to gather some past tutorials here to make things easier for all. The direct link to each post is listed below the pictures.
Christmas (On A Shoestring) Placemats 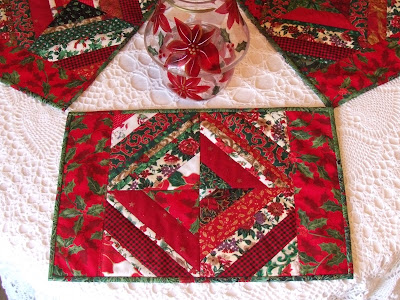 A Something From Nothing "green" tote bag: 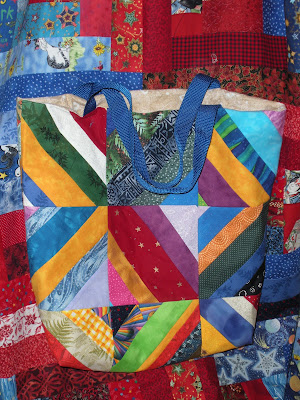 http://sewkaren-lycreated.blogspot.com/2009/04/something-from-nothing.html
Quick Christmas Sachet:
(this reminds me - I must check to see if Mrs. Pugsley has the scented cranberries in at her Emporium yet!). These are great to hang on doorknobs (and tie on packages): 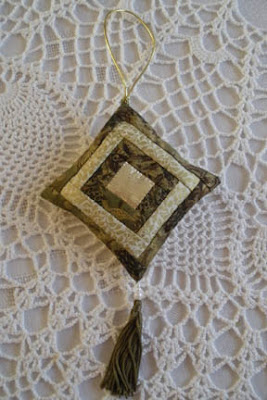 http://sewkaren-lycreated.blogspot.com/2008/09/celebrating-15-years-on-net.html
For the person who asked yesterday if I am all ready for Christmas yet, with sewing and shopping done and house decorated...well, not quite...but hubby did take the balloons down from eldest's birthday party last week...which was in August, and the Jim Shore Santas are up in the Family Room (ok, they didn't get put away from last Christmas...) From this, I'd say we're ahead of ourselves this year...
Enjoy the tutorials! :)
Posted by Karen at 06:37 6 comments:

Email ThisBlogThis!Share to TwitterShare to FacebookShare to Pinterest
Labels: Tutorial

Oooohhhh - look at these beauties, from Joan! 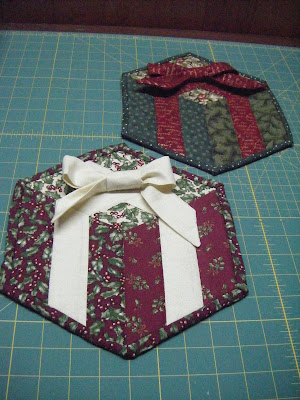 Joan has added a ring to the back of hers for hanging. The size of the mat is about right to hold a pot of Christmas tea. Beautiful work, Joan, as always. Love seeing all the pictures - keep them coming!
Posted by Karen at 06:28 4 comments:

Carol, from "beautiful downtown Wallace, N.S." has sent in this picture of her completed top from the workshop in October. You can see that Carol had in-house help with her project. 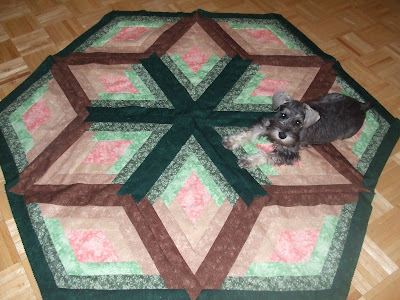 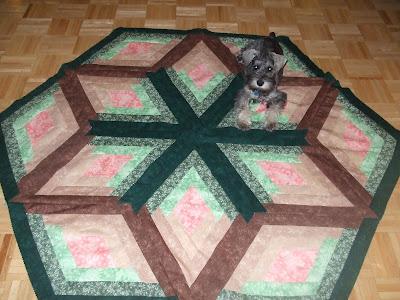 I couldn't resist that title...but an even more appropriate one would be "Ruby's Gems", as Ruby from N.S. has sent along pictures of two of my projects which she has completed. Here is Ruby's version of the Diamond Chips tutorial from last week. It's lovely! 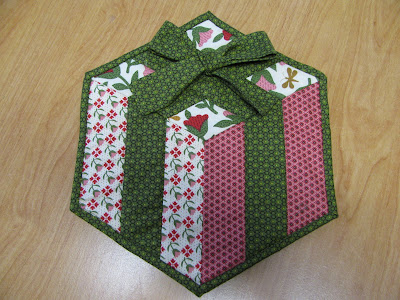 Ruby also made my design for this selvedge tote bag, which appeared in last month's issue of McCall's Quilting. Ruby's comments on the tote bag echo my own experience - so much fun to sew, and a great conversation starter. Someone always asks about the bag. 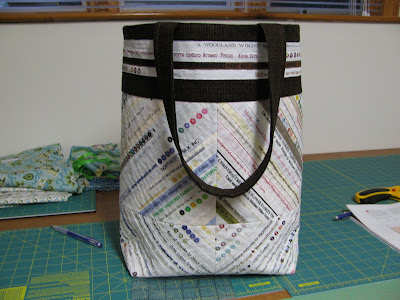 I found myself reading the selvedges on Ruby's tote to see if I had used any of those same fabrics. Can you see any familiar ones there from your stash? :)
Thanks so much for sharing, Ruby. I encourage all visitors to leave a comment at the end of the blog posts. It's easy to do: simply click on the word "comments" and a field will appear where you can type. If you do not have a Google account, just choose "anonymous" and the comment will post.
Posted by Karen at 15:29 5 comments:

Another Gift From Lynn

As promised, here's another Christmas Gift diamond project from Lynn. Isn't it yummy in these colours - it looks like a petit four- good enough to eat! 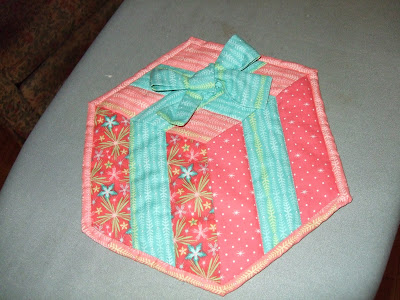 For those who have emailed asking where the directions may be found, just scroll down through the posts to October 25th, or click here.
Keep the pictures coming, Lynn (and everyone else!) - we love seeing them!

The emails I've been receiving on this Diamond Chips tutorial have been terrific! Thanks so much for the great comments. I am hoping you will share your pictures of completed projects for all to see, as my good friend Lynn Bourgeois of N.S. has done. Isn't this pretty? Lynn is busy making another, so perhaps we will see it soon also. 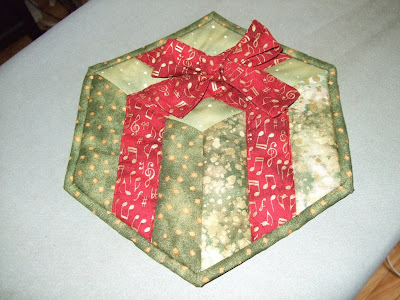 The neat thing about this gift is that it already comes gift-wrapped. You could tie a tag to the bow, or better still machine quilt a tag by stitching the recipient's name inside a rectangle right on the top diamond.
Posted by Karen at 12:43 3 comments:

(Quilting) Angels All Around

An angel appeared in my mailbox this morning – both literally and in spirit. I was very surprised to find a package from Joan who attended the Diamonds workshop at Fibre Festival last month. My first thought was that she was sending more selvedges to go with those she brought to class. Here’s what I found when I opened the package:
The Quilter’s Angel: The Protector of All Things Unfinished 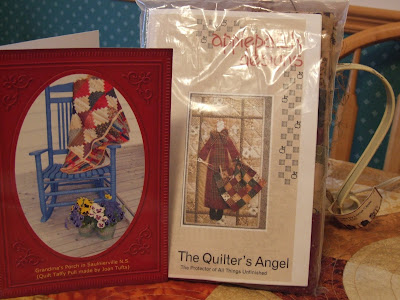 Well, who doesn’t need one of those!? This angel will be particularly busy as there are many things unfinished around here. Not only did Joan send the pattern by Applepatch Designs, but she kitted up the material to make the project and carefully labeled each piece as to its intended placement. What a treat this is. Honestly, I can’t recall the last time I made another’s design and I will so enjoy having the instructions all laid out in front of me to follow instead of making things up as I go. I am very anxious to start the project and the colours are perfect for my room. Notice also the beautiful card which features one of Joan's quilts. Thank you, Joan, for this delightful gift. If you check out Joan's blog, you can view her completed Log Cabin Diamonds from the workshop; http://ouvragesduneacadienne.blogspot.com/2009/10/last-october-project.html As you will see from her posts, Joan is a very productive quilter - do you suppose she has an angel working on her behalf? Hopefully my angel can begin her protective duties while still in the package. No sewing for me today, as tonight I am speaking to the U.C.W of Trinity St. Stephens United Church and will spend today sorting and packing quilts to take.
Posted by Karen at 10:49 3 comments: