Here's another clever window by Jackie Estabrooks, the decorator at Dayle's. This one is in Pugsley's Pharmacy, 63 Victoria Street in Amherst, Nova Scotia. 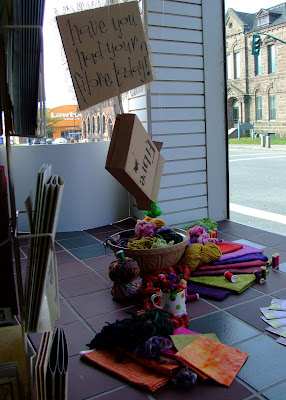 Wouldn't you love to open a box at breakfast and pour out a bowl of this type of fibre.?! Beats bran anyday! 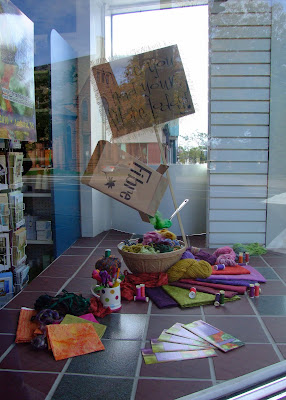 The following information about Pugsley's Pharmacy comes from this Amherst website: The pharmacy located in Tupper Block was originally owned and operated by Sir Charles Tupper, former Prime Minister of Canada. Formerly known as R.C. Fuller & Co., Pugsley’s Pharmacy is the oldest established business in town. Pugsley’s Pharmacy celebrated its 150th anniversary in 1993, making it among the oldest continuously operating drug stores in Canada.
You can read more about some of the historical buildings in our town and take a virtual walking tour: http://www.creda.net/~dars/hwt/
Today is the final day to submit blocks to dayle's for the Quilt Block Contest. Doreen is working hard to get all the blocks up on display before Tuesday, when the store reopens after our Thanksgiving weekend. I had a peek at what's up so far, and they're stunning. I will post pictures as soon as they are all displayed.
Posted by Karen at 08:25