A Gift For The Queen

The grand finalé of the 2010 Nova Scotia Fibre Arts Festival was held Saturday afternoon at Tantramar Theatre and it really was a special ending to an incredible week. Quilt collector John Corey from Havelock, New Brunswick gave a lecture and exhibit from his extensive collection of heritage domestic quilts. I enjoyed the drama, wit and suspense of his presentation a great deal, including the intriguing title he chose for his talk...the details of which he left to the very last. He had his quilts arranged on tables in an L shape around the room, folded right sides in, so that we didn't see the pattern on the quilts until each was shown. Front and centre on the main table was a lone Louis Vuitton suitcase which he told us held his prize possession. Naturally, he tantalized us by skipping past that case when he came to it, leaving it unopened almost until the end of the program. It was great!

Mr. Corey was happy to allow photographs be taken of his textiles. One of my favourites of the show was this gorgeous Feathered Star design. John and I discovered we both have a penchant for red and white quilts, and he had many samples accompanying him as proof. You can see one of his maple leaf quilts in the background (he brought an appliquéd version as well). 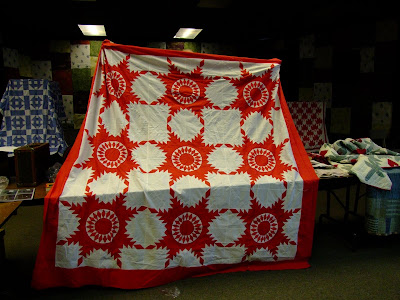 He spoke of this exquisitely rendered Oak Leaf and Cherry pattern as being a "masculine" design, something I had never considered before. 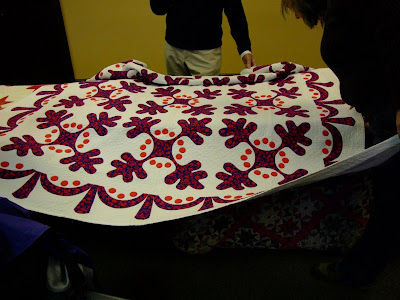 The small, hand-pieced star units in this quilt made it a stunner for sure. 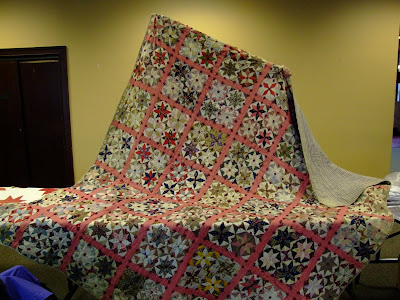 And then it was time to open the Louis Vuitton suitcase. With much drama, he clicked the lock open and... 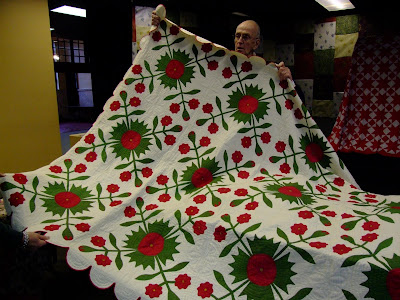 It is impossible to get the impact of this fine piece of needlework from a photograph but it was stitched by a very skilled hand, and is in pristine condition. There was nothing thick or clumsy about this quilt: the fine cotton used front and back was an exceptionally high thread count, the batting very thin, and the stitches excruciatingly tiny. As soft as butter, it was a haptic delight and the proportion of the materials and workmanship was exact. The scalloped edge was finished in a very narrow bias binding, and the sharp inner corners were flawlessly turned. I grew so much in my knowledge and appreciation of fine quilting from seeing this lovely piece. Coincidentally, this quilt and many others in John Corey's collection have been appraised by Diane Shink, the co-author of our book Canadian Heritage Quilting. 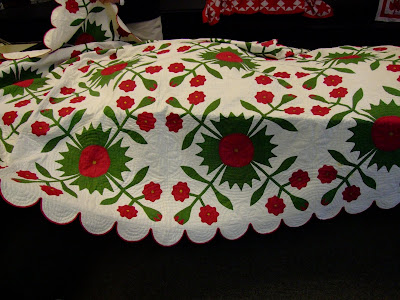 This quilt is the jewel in the crown of John Corey's collection, but had no connection to the enigmatic title of his lecture. You will have to attend his next presentation to learn what that was about.