We are somewhat nervously awaiting the arrival of Hurricane Earl, and checking the progress of the storm here: http://www.stormpulse.com
Amherst is located on the border between Nova Scotia and New Brunswick, just to the right of Moncton on the map. We are directly in the path of the storm, as is Yarmouth. It appears Halifax, which was hit so hard by Hurricane Juan several years back, will escape this storm. We took some time to visit the hives to make sure things were ready there. When we arrived, there were still a few hives covered in bee beards, although not as many as our last visit. Our weather is unusually warm at present and it's hot inside the hives. 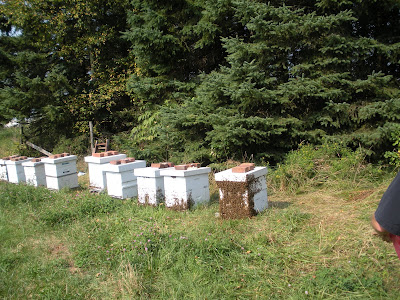 This hive was a particular concern. Hubby (the head beekeeper) decided we should add another box on the top of the hives where the bees were congregated on the front. This would allow extra space for them to go inside and perhaps not be so hot for them. 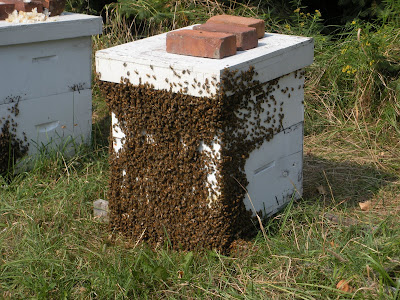 Here's the same hive after adding the extra "storey"; many have already gone inside. When the rain hits, they will want shelter. We also left water for them again today, although by tomorrow this will no longer be an issue! 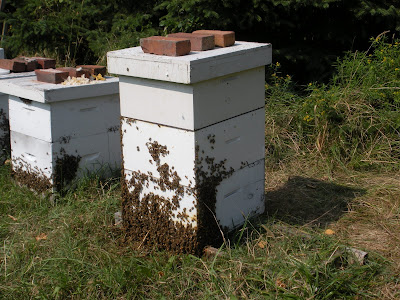 In general, we found the bees very agitated today- not aggressive (no stings) but they were extra skittish. We assume they sense a change in the weather. Extra bricks were placed on top to hold the covers down. Beyond that, there isn't much that can be done. Hopefully the trees behind them will act as wind break...rather than break in the wind.
Posted by Karen at 17:09