"Got to Get You Outta My Life"

I have to wonder if anyone reading this blog is actually a quilter, since all the emails I have received in the past little bit have either been about bees or Paul McCartney! Since so many have asked about the concert, I decided I had best post some details of this absolutely wonderful day.
I wore the Tshirt from the Quebec 400 concert last July. This is the first time I have worn the shirt. It was a great choice, as so many folks throughout the day came over and showed me theirs from this event also - classmates, I guess this makes us...McCartney alumni. A friendlier, warmer bunch there could not be. 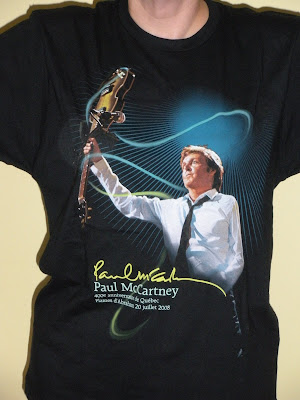 Our merry little band of eight set off, clutching these precious tickets firmly: 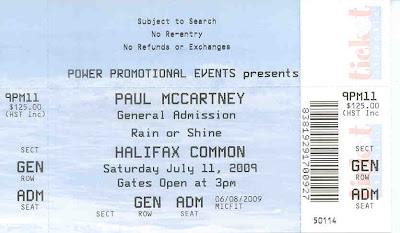 Amazingly, we found a parking spot very close to the Commons. We arrived around 3 pm, and left well after 1 am (that late as one of of our group got lost and we had to wait for her ...some people, huh?) The parking cost us $4.00 - what a bargain! We walked along some of Halifax's beautiful tree lined streets enroute to the concert. 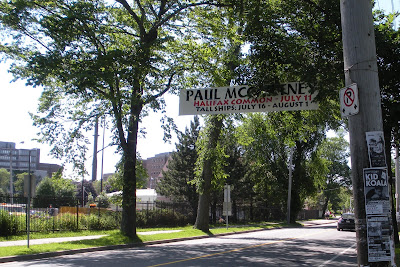 Learning from last year's sell-out experience, my first stop inside the gates was at the merchandise tent. There were many styles, colours and sizes from which to choose. 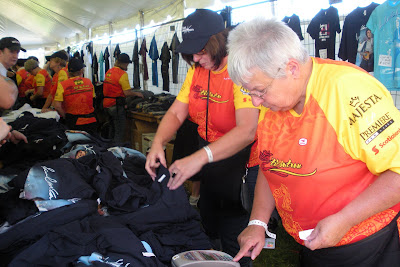 The one which said "Halifax Commons, July 11th 2009" looked very similar to what I already had, so I opted for this grey one featuring Paul and his beloved Hofner bass. I like it :) 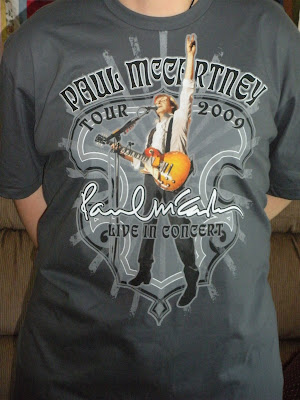 The crowd was large but moving quickly as we headed onto the grounds to claim our spot. We made note of the landscape and decided if the group got separated we would meet up afterwards at the kiosk which read "Tickets, Tickets, Tickets." Rules allowed folks to bring a fold-in-a-bag chair and there was a special section where those chairs could go. We got set up and began the wait. 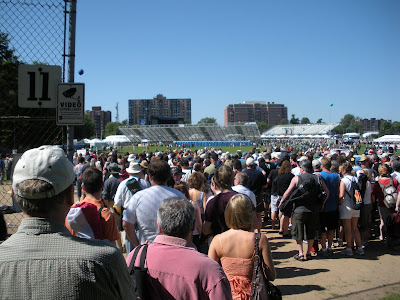 It didn't take terribly long for me to get antsy and decide I wanted to be closer to the action...so I ditched the rest of the group and elbowed my way forward all alone. I ended up about 11 rows from the front of the stage. It was a perfect spot to watch what was to be a perfect concert. Joel Plaskett warmed the audience up for Paul, and what an entertainer he is. Even though playing for a crowd that size must have been daunting, he appeared totally comfortable and in his element. No wonder Paul hand picked him to open. Way to go Joel - you did us proud! We loved his set.
There were many highlights to Paul's performance; for me, it was a very moving moment when the 78th Regiment Pipe and Drum Corp joined Paul onstage for a rousing version of Mull of Kintyre. I loved that the backdrop projected across that huge stage was our Nova Scotia tartan. 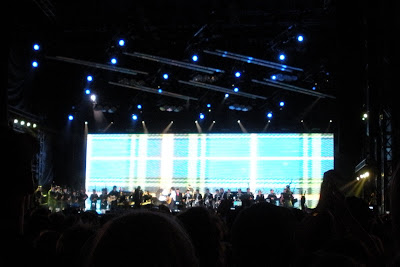 It was very cool to hear Day Tripper performed, as we understand that one has not been done live since the Candlestick Park concert of August 1966. The pyrotechnics employed during Lie and Let Die were also very dramatic, although admittedly having seen them last year in Quebec made them rather expected. Spectacular none the less, and they were larger in Halifax than in Quebec. Everyone loves the part with the fireworks! 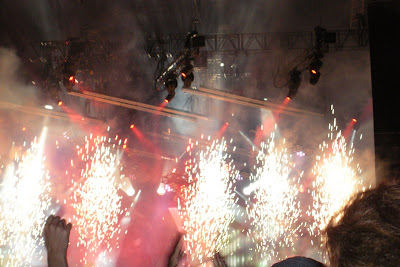 Paul arrived on stage at 9:20 and sang non-stop until almost midnight, giving two generous encores. His energy is amazing and his musical talent unsurpassed. 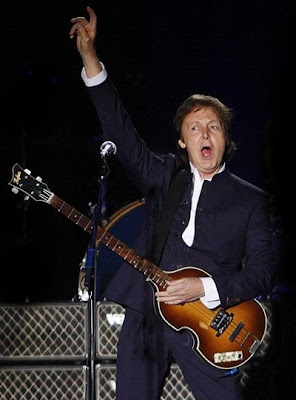 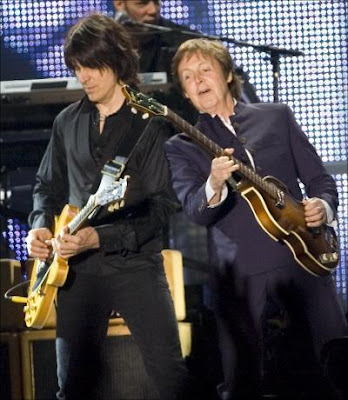 And then the concert ended... and I got lost. Literally. In a sea of people numbering well over 50,000. Remember that "Tickets, Tickets, Tickets" kiosk where we had agreed to meet up? Turns out there were 3 identical ones...and I chose the wrong one. An overloaded cell phone network made calling impossible. I felt like Waldo without a striped shirt in that huge crowd...Eventually, things sorted themselves out...and they found me...but we were very late arriving back home. It will take awhile to live that one down, especially as all the kids in our group had no problem finding the correct meeting spot. Sheesh...
It was a beautiful moonlit night, and the concert could not have been more perfect. We look forward to reliving the moment via the DVD which will be released shortly.