The String Theory quilt is all finished. 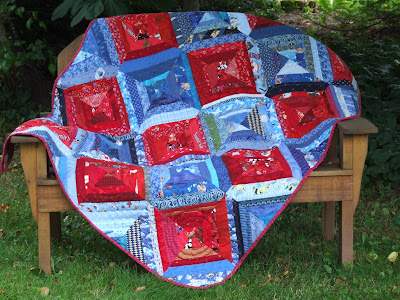 Polly was a big help in checking for errant thread ends which needed to be tied and clipped. 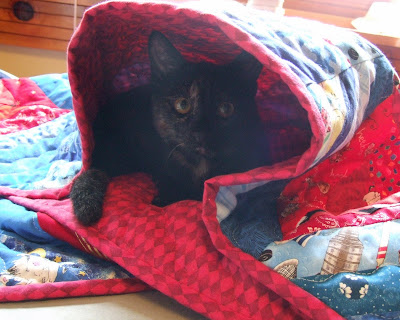 I love sewing string quilts. No two ever look the same, and they are a fabulous (and mindless) way to use scraps. As always, I began with an old phone book as foundation for this project. The lap quilt layout is 6 blocks across by 8 down, so I tore out 48 pages and cut them roughly into 8-3/4" squares. I used fabric strips leftover from my Log Cabin X quilt, as well as some red scraps. Strips were cut into random widths, varying from 1" to 2-1/2". I began with a blue strip right side up diagonally across the centre of the paper. A second blue strip was sewn right sides together with this strip, and a red strip sewn to the opposite side. Sewing a strip to either side of the centre at the same time made the blocks go together quickly. The strips were flipped to to the right side at the same time, and pressed in one operation. Then it was back to the machine to add two more strips and so on until the foundation was covered. Blocks were trimmed to 8-1/2" square, giving a finished block size of 8" and a quilt 48" x 64". Pictures of this process may be seen on a previous post on string placemats.

Polly and I settled on this layout for the blocks: 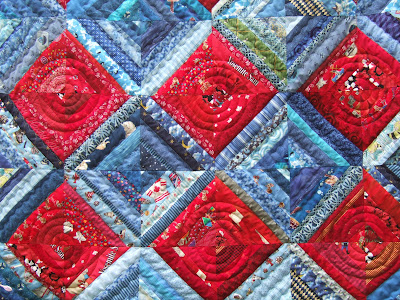 As this is a dorm quilt intended for a young man headed into a discipline requiring mathematics and physics, it seemed appropriate to use a geometric spiral as a quilt design. Hearts and flowers would not be appropriate here! The square spirals are stitched in a wave pattern, another element familiar to a budding physicist. 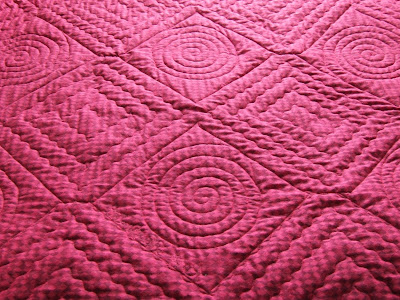 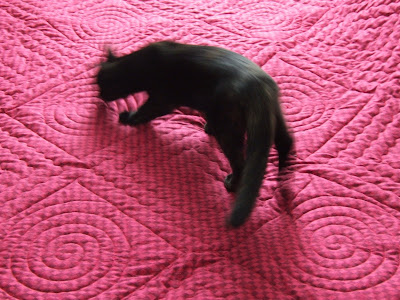 The date and the recipient's name were free motion quilted in one of the blocks. I used red Wonderfil Konfetti - a 50 wt. cotton thread - for the red blocks and YLI blue variegated Ultrasheen for the blue blocks. 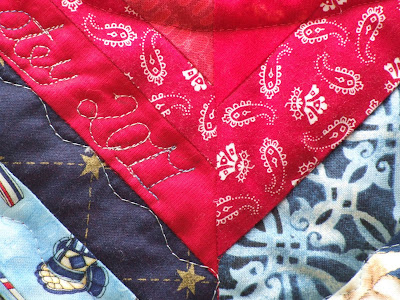 After handstitching the binding in place, Polly and I took the quilt outside yesterday to photograph. 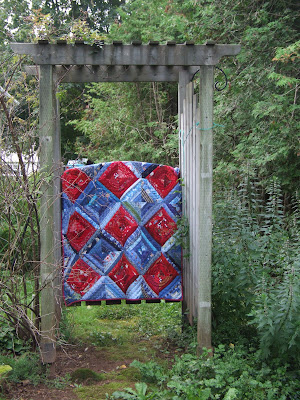 Polly took on the responsibility to meter the light, and check for any stray catnip mice on the premises. (She's the black blob near the top of this tree.) 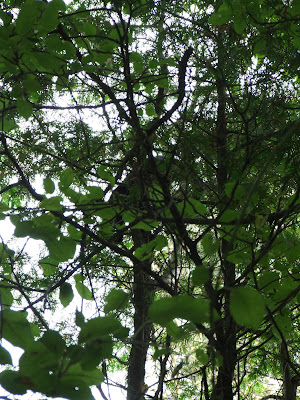 No mice were spotted and Polly gave the all-clear, so we proceeded with the pictures. Thanks for all your help, Polly; it only took twice as long with your input :) 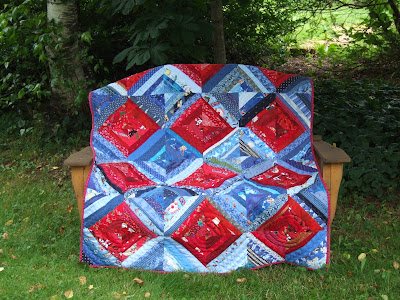