The Eye Of The Quilter: Houston Exhibit

Some very exciting news out of Houston to share. Two of my photographs have been juried into an exhibit entitled “The Eye of the Quilter: Inspirations”. The show will debut at the 35th anniversary of International Quilt Market/Festival in Houston October 10-18. Instead of works of fabric, this special exhibit will feature photographs—taken by quilters—of something that “inspires” them. I am humbled to be included. One of the photographs chosen is of Logan's barn in West Amherst. It was a rare moment when the light was just right, and the wind still. We were passing by enroute to checking bees and something blood-red in the water of the pond caught my eye. Upon further investigation, it turned out to be a perfect reflection of the barn. Of all times not to have a camera with me! I raced home, hoping the light wouldn't change before I got back...only to get held up by a train at the crossing on Victoria Street! It was a very long few moments waiting. Fortunately, things were still calm and peaceful upon my return.

The other photo included in the exhibit is of a quilt I made for the book Canadian Heritage Quilting The photo of this Redwork Strippy quilt was taken on a bench in our backyard after a snowfall. Not wanting any footprints to show, I carefully skirted the edge of the yard, climbing through trees with the quilt and camera held high. Approaching from the back, I tossed the quilt forward and it landed perfectly spread on the bench. Luck was with me that day. 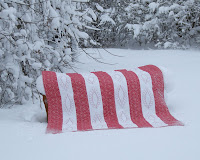 Unbelievably, this makes two quilts from Canadian Heritage Quilting which will be represented in the Houston show. My “Log Canada” has been touring the U.S. since April in an exhibit of Canadian quilts entitled “O Canada”. If you are lucky enough to be one of the more than 80,000 visitors to this show, perhaps you will be kind enough to snap a couple of photos to send along as Regina from Wisconsin did in April.
Posted by Karen at 07:26