In this post are pictures of some of the samples used in the Diamonds Are A Girl's Best Friend workshop presented at the 2009 N.S. Fibre Arts Festival in Amherst, Nova Scotia. The class was more than just the sewing of one project; it was a day of "thinking outside the diamond."

When I decided on the topic for the workshop, I spent a great deal of time in private brainstorming sessions looking at different ways that diamonds may be used. I came up with these ideas which I thought might inspire a bit of lateral thinking among class participants. Our project for the day was this log cabin diamond star which was chosen for several reasons:

I brought along samples of my Seven Sisters pattern which uses smaller diamond stars, pieced in log cabins, pinwheels, and plain fabrics. 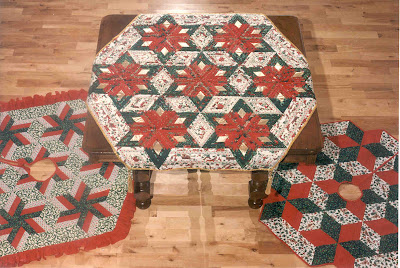 After we had mastered the rotary cutting, we then examined various ways one-patch diamonds could be used in a project, and addressed the tricky issue of off-setting the patches when joining the diamonds. We looked at how to stack fabric to strip-piece, cut, and sew one patch diamond blocks.

No class on diamonds would be complete without a nod to the topic of isometric perspective where diamonds are used to give the illusion of depth and dimension. It surprised many to realize that the quilt below is basically the same as our log cabin star workshop project. It uses the same number of blocks, and the same number of strips on each log cabin block. Can you see how easily our star morphed into these boxes? 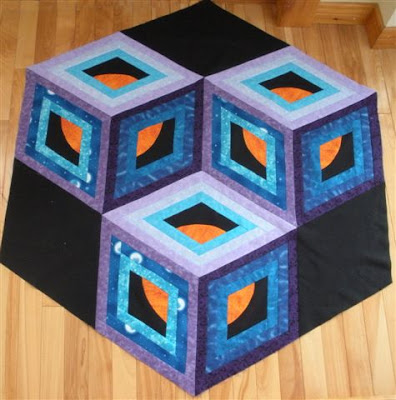 I sewed several samples showing how the placement of light, medium and dark values causes our eyes to tumble the blocks. This is a favourite traditional design which our grandmothers often used. 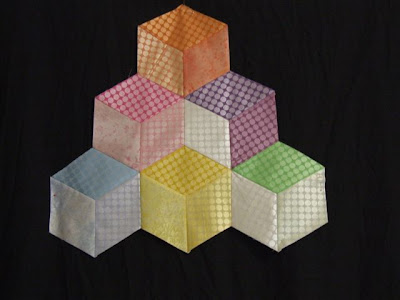 From there, citing Karen Combs as reference, I showed some fun things which could be done with diamonds. You will notice many of these pieces are unfinished. 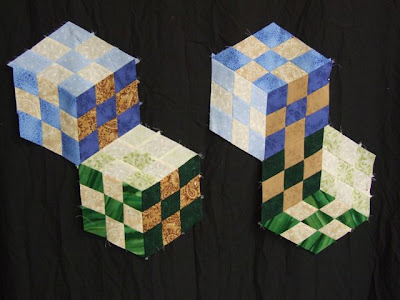 Here are some diamonds joined in an Attic Windows setting: 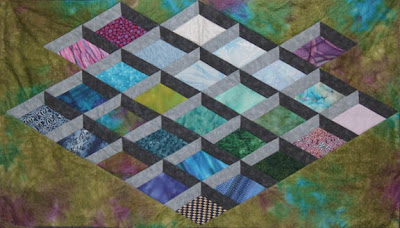 The same Attic Windows set was used in this second example, but I reversed the width of the centres and sashing strips. The effect is quite different: 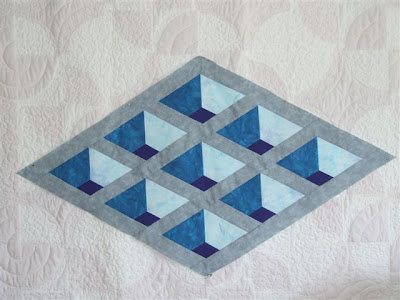 The same diamond is used for the top of this "vase": 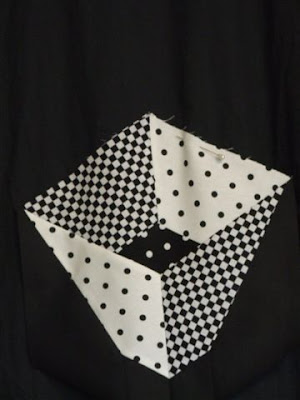 Of course you cannot talk about 60 degree diamonds without also including companion geometric shapes of equilateral triangles, hexagons, and half hexagons, which share a common angle. Grandmother's Flower Garden is a well-known traditional pattern composed of hexagons. My sample for this pattern was done in black and white, and sewn into a cushion which resembles a soccer ball (you can picture this one yourself- just visualize a soccer ball.) It was a piece I had designed for Quick & Easy Quilting a few years back when I was writing a column for that magazine. Hexagon blocks were joined by hand in the past, but are easily and quickly sewn by machine.

This sample was pieced in honey shades to look like the comb our bees spin in wax on their foundations: 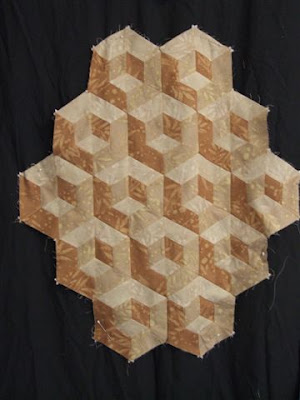 The "Inner City" block, composed of half-hexagons, was my favourite to sew and is a terrific use of scraps. 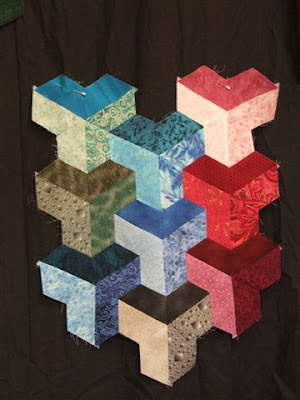 When I packed up the samples to take to the workshop, I did a rough count of the "Y" seams which I had sewn to produce them. It came to just under 500 "Y" seams. I was quick to point out to the participants that there was to be no whining about sewing 6 for their project!

This workshop was organized and hosted by the Cumberland Quilt Guild. It was originally scheduled to run one day, but it filled quickly and the waiting list was long enough that we added a second class. In the end, both classes were over-filled, as we squeezed as many in as the room would hold. It was wonderful to have so many enthusiastic quilters gathered - as quilters, we grow so much within ourselves in such a coming together. I hope the attendees left with their heads weighted down with diamonds.

Plans are already underway for next year's N.S. Fibre Arts Festival. If you have ideas or any comments to share, please visit the festival website to find contact information. For those who joined us in class, I welcome feedback and sincerely look forward to seeing pictures of your finished pieces.