No one will ever accuse me of being a neat freak...but I do like things organized in my own way. When I started quilting, my dear sister gifted me with a cute metal thread holder that hangs on the wall.  It was sufficient to hold my then inventory of thread which pretty much consisted of cotton spools in basic colours:  white, black, ecru, blue, red and green. 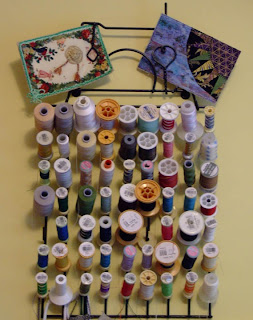 As my knowledge of thread power grew and the wall holder steadily filled, sister appeared with two clear thread storage boxes...both of which I quickly crammed full.  This one holds specialty threads like silk, holographic, and even some glow in the dark. 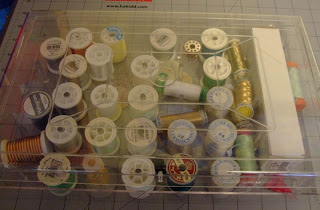 Two cans house my treasured hand-quilting threads, extra-special to me as many of the spools came from my grandmother's supply. 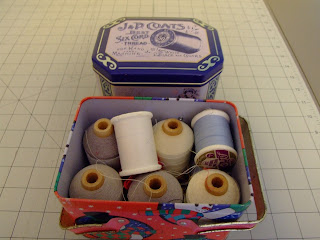 Hubby came to the rescue with a wooden board in which he hammered long skinny nails on an angle.  It wasn't pretty, but worked very well for many years. 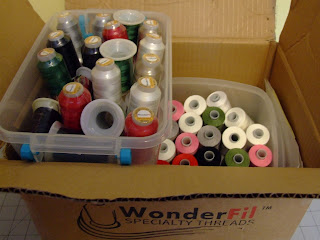 Hubby to the rescue again;  this weekend he installed a larger version of his clever and simple thread holder.  In all, it contains 250, 3-1/2" nails placed on a 30°angle.  Smaller caps fit on the bottom rows with larger cones on the top. His cost was approximately $5. for the wood and $10. for nails. He snugged it up under a shelf which holds boxes of fabric and I was in heaven...until 5'2" me went to load the spools on and realized I could only reach the bottom row of nails. Oh oh...

He obligingly adjusted the holder down about 6" and I am happily moving into my expanded thread storage space.

We'll see how long it takes to fill this one.  I am keeping the smaller, original board in case it needs to go back up sometime too!
Posted by Karen at 08:51