The cheery emails and comments the past few days have been wonderful, I can't thank you all enough. There are so many good and kind-hearted quilters out there...and Joanne Colleaux of Armstrong, B.C. is one of them. I will remind you that earlier this year Joanne had an impressive win at the Pacific Northwest Quilter's Association Show in Tacoma, WA. She has shared another photo with us, and writes this: A few weeks ago you blogged about your blue/neutral string blocks, and that pushed a string project of mine up to the top of my to-do list. I added several more blocks to the dozen I'd made for a guild demo in the spring, and then had a fine time playing with the results on the design wall. The first photo (with a star in the centre) is the runner-up, and the third photo (with borders) is the one that won out. Somehow the centre makes the quilt look rectangular to me, despite the fact that it is square. 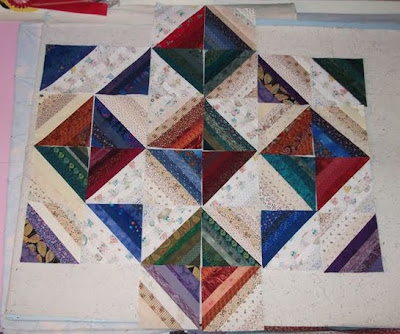 I enjoyed seeing the layouts; this one she chose is an unusual set for sure. 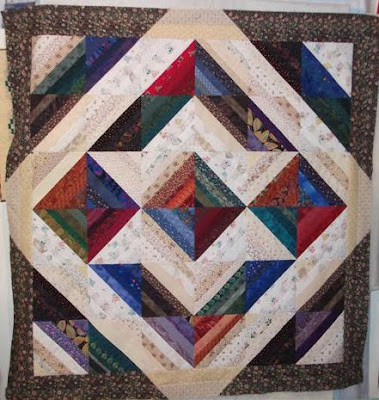 Joanne also sent along a picture taken at a recent Christmas Show and Tell at the Shuswap Quilters Guild in Salmon Arm, B.C. Madeleine Welch did a very pretty version of Santa's Trip Around The World. I like the thread she used for the reins - it shows up nicely on the red. Nice work, Madeleine! 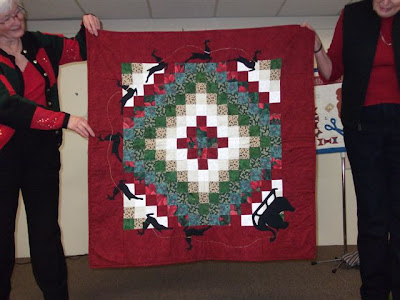 My thanks to you for sharing the photos, Joanne. I hope you will check back tomorrow, there are more to see!
Posted by Karen at 07:36

Email ThisBlogThis!Share to TwitterShare to FacebookShare to Pinterest
Labels: Quilt It For Christmas, Quilting, Santa's Trip Around The World; String Quilt