"A Swarm In June Is Worth A Silver Spoon..."

There are many perennials in bloom in the garden and these German Bearded Iris are among the most impressive. The heads are massive and so exquisitely beautiful. They look as though they are stitched from velvet. 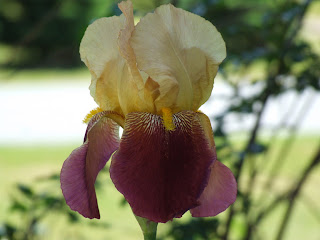 Although it's hard to tell from the picture, there are six blooms and buds on this one stalk and we know from experience it will soon topple over unless some auxiliary support is added. One year they were so heavy, it took a hockey stick to hold them up! 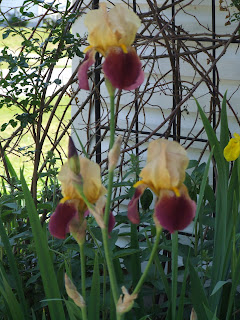 There are also many small Siberian Iris in bloom, this one a very vibrant yellow. I love the markings on the "tongue". 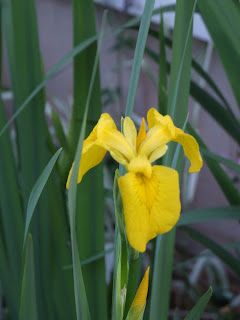 Apparently it isn't just me who is attracted to these blooms. Yesterday my youngest son alerted us to the fact there was a cloud of bees in the backyard. Hubby had been cleaning out some old hives on the weekend - melting wax, etc. - and they attracted the attention of a passing swarm. They decided this was a great place to land and set up housekeeping, and we're very glad they did. We were quick to make the premises as inviting as possible in hopes our guests will make this their permanent home. 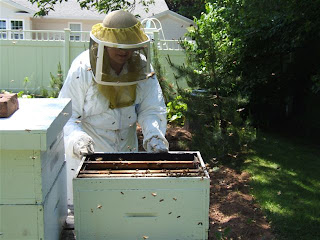 It was a good many bees. They settled first on three frames, then we added more plus a feeder to fill the super. When a swarm lands, one can never be certain they will stay. These bees were quite content (relieved maybe?) to find a new palace for their beloved queen. When I checked back on them later, they were happily "bridging" the gap between frames. I could hear the hum of the hive on approach -a good sign. 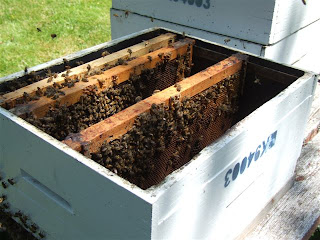 Early this morning, all was well with the swarm and they were out investigating their new surroundings. Naturally, they cannot stay here long as we live in town; they will join the other hives in the blueberry blossoms tomorrow. 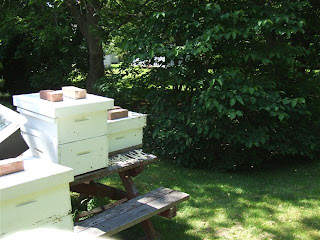