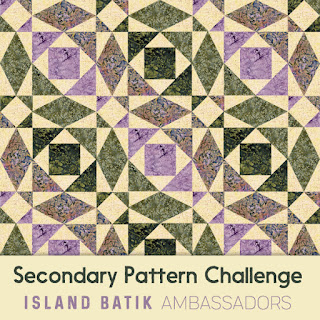 The Island Batik Ambassador challenge for July is to use blocks that create an unexpected design - i.e., a secondary surprise - when placed side by side.  Imagine my surprise when fiddling around with my blocks to find not just a secondary but also a tertiary (third) design emerging.

I started out sketching what I knew as an "orange peel" block, only to discover that when there are four peels in a single block, EQ8 calls it Joseph's Coat. Regardless of the name, it's a great block, and one that provided great structure and movement to this very simple quilt.  This is Joseph's Coat: 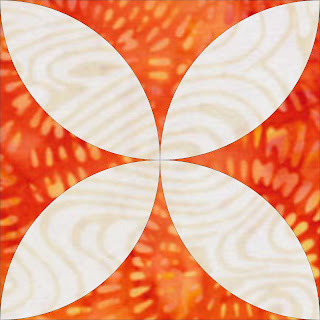 I placed it next to a plain block. 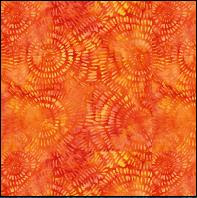 I love the rather arabesque shape it gifted to the plain block. 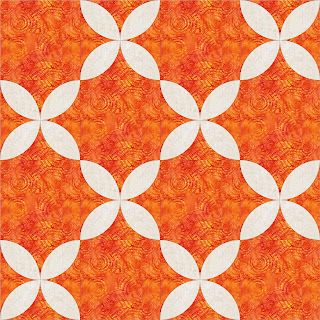 Pretty...but with a little tweaking of colours, this emerged.  The orange peels no longer looked like flower petals, they were now more of a curvy chain, dancing between the coloured blocks. 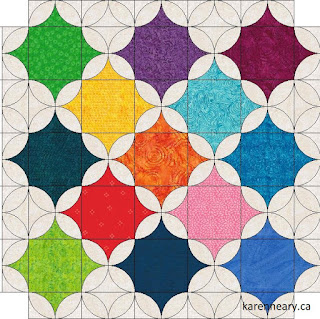 With a little more colour play, immediately, the tertiary design of small border stars emerged.
I love it! 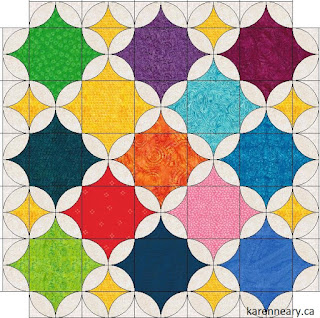 Now to find fabrics in my stash that would work in this quilt... Island Batik very generously provided a good amount of fabric in the first ambassador box which arrived in February.  I confess, I have used nearly everything in that box! It's a very good thing that a second box is on its way here now. I chose "milkshake" from the "Foundations" line for the peels;  I started to cut the pieces out with a seam allowance to piece my blocks with curved seams, only to realize I would not have enough fabric.  Plan B was to use raw edge appliqué instead, which meant I did  not have to have a seam allowance.  Gaining that extra 1/2" per peel was just enough for me to cut enough shapes (88 peels) for a 42" square quilt.  Whew! 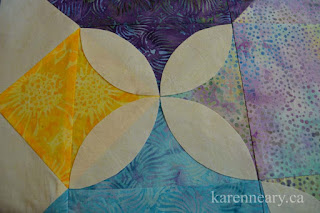 The pieces were fused in place, and blanket stitched using Aurifil 2021, Natural White. My favourite Hobbs Tuscany wool batting was used for the fill, and a plain piece of robin's egg blue for the back. 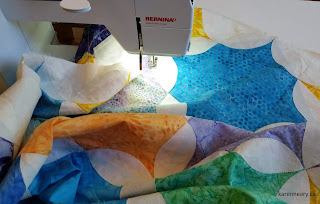 I had a stencil from Mrs Pugsley's Emporium that was perfect, and it fit the plain spaces to a T when placed on point. 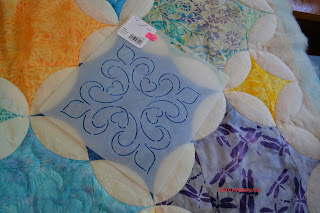 My Bohin marker is quickly becoming my go-to marker. Its fine lead is great for a stencil, the lines show up clearly, and it's easy to remove afterwards. 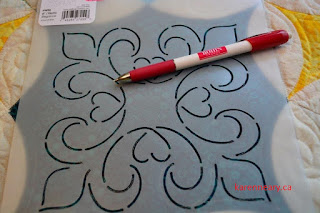 One of the most enjoyable parts of this project was choosing which threads to use.  I admit to a rather extensive Aurifil stash, and it was great fun mixing and matching the colours. Variegated threads work particularly well with batiks, IMHO. 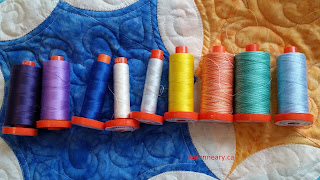 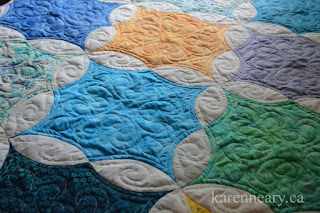 I had just enough pale mauve dot to bind the 42" square quilt. 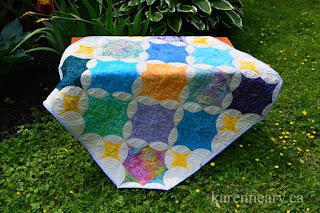 It looks a bit dreamy;  I think this would be spectacular in a bed-sized quilt.  I will work away at sewing it again a couple of times to tweak the design before I release a pattern. Please check back later. 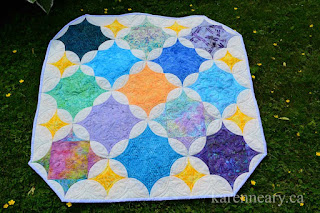 It looks very summery on a table. (Thank you for the flowers, Taylor :)) 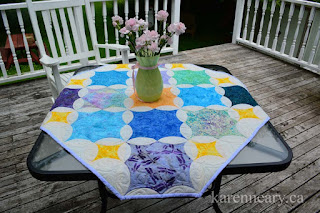 Thank you to Island Batik, Hobbs Bonded Fibres, and Aurifil thread for supplying the materials used in this full-of-surprises project. 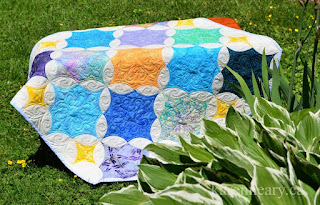