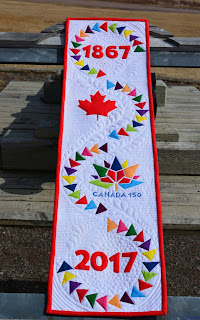 For those of you who don't know, "Row By Row" is a shop hop for quilters whereby they visit a participating shop and receive a free pattern for a row of a quilt. Each row measures 9" x 36" in either a vertical or horizontal orientation. When enough rows are collected, they are sewn together into a quilt. It seems an easy thing, to simply pick up a free pattern at a shop, but there is a lot that goes on behind the scenes to make a successful "rowing" experience for quilters.

Each year has a different theme, and this year it is "On The Go". Last year, I had the pleasure of designing Mrs Pugsley's Emporium's first Row By Row.  The theme was "Home Sweet Home", and her building is a perfect home for quilters!

When Mrs Pugsley's asked again for this year, tying Canada's sesquicentennial celebration to the theme seemed a perfect match: Canada On The Go! Our area was very involved in the creation of our country, as Amherst was home to four Fathers of Confederation: Edward B. Chandler, Robert B. Dickey, Johnathan McCully, and Sir Charles Tupper. I came up with a design which worked both horizontally and vertically and submitted a computer sketch to Mrs P's for approval. Once she commissioned the piece, I set about getting approval from the Canadian Heritage Commission, who owns the copyrights on Canadian symbols. The application was made in early January of this year. You can see that originally, I intended to use the 1967 centennial logo to be part of the progression, as well as our current Canada 150 logo. 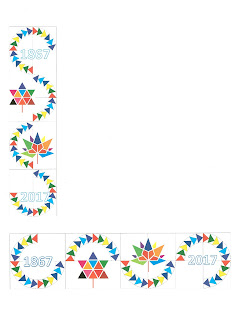 Approval came for the use of the Canada 150 logo, in a very official looking 7 page document.   What an honour to hold a license granted by "Her Majesty the Queen in Right of Canada"! 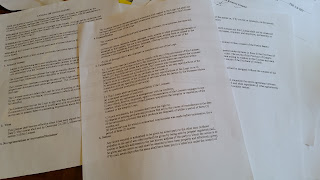 By this time, it was the end of February, and I now realized that the copyright for the (absolutely brilliantly designed) centennial logo belonged to its creator, Stuart Ash. I had no idea how to get in touch with him, and was fearful that permission could not be secured in time. My clever artist friend, Cheryl Coville, suggested a plain maple leaf might work as well, so the design was altered slightly. Thank you, Cheryl - I think I like it even better this way. :)

Mrs Pugsley chose the fabrics she wanted to use: Kona solids in jungle green, chartreuse, goldfish, citrus, Prussian blue, berry, mulberry, honeysuckle, water, cardinal,and - of course!- Canada Red. She special ordered in the colours for the samples. While I waited for fabric, I drew up the templates and piecing diagrams on the computer, and roughed out the instructions. Mrs. P had to decide at this point how she would be doing the packaging, so that the instructions would be formatted to the correct sized paper to fit attractively in her kit bags. 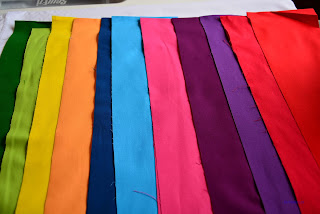 The blocks are curved flying geese, whose points are foundation pieced. Easy as 1, 2 3. Because the templates are drawn on the computer, they fit together perfectly. The Canada 150 logo is even simpler to add, with fusible appliqué. With a white background, you can place the top over the pattern, which shows through for correct placement of the elements. 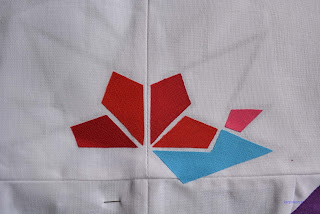 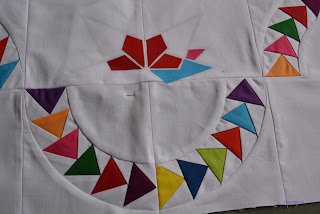 I stitched both a vertical and a horizontal version.  Mrs P chose a Nova Scotia tartan for the back of one, and a maple leaf print for the other. 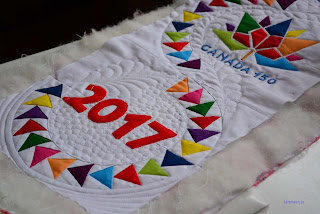 For the vertical one, I quilted a feather trailing down the length of the banner. 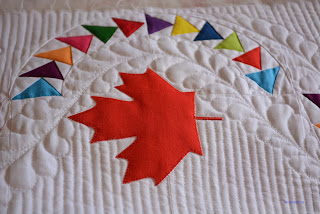 These are champagne bubbles for our celebration! 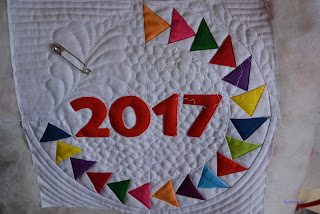 I took the banners to Fort Beausejour to photograph. As a national historic site, it seemed a suitable spot. 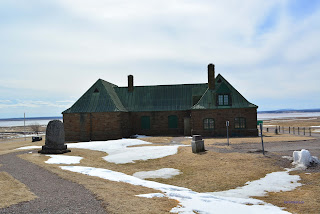 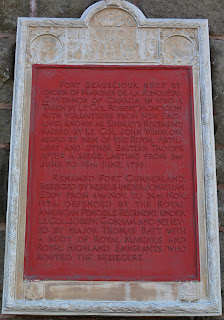 By now, it's April...and you'll see we still had snow. The park was not yet open for the season, but there are always visitors there. 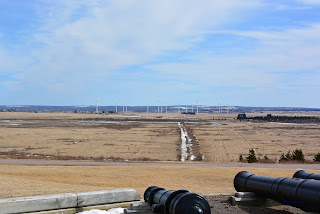 As often as I've been to Fort Beausejour, never has the wind not been blowing a gale, and that day was no exception. It is a challenging, albeit beautiful, spot to photograph a quilt. 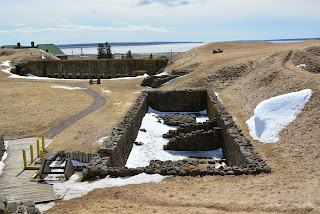 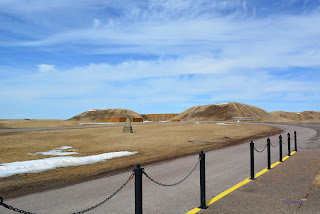 It was a bit of a go, slogging through the muck, but I was determined to get some pictures. ("Please don't let me drop that white banner here!") 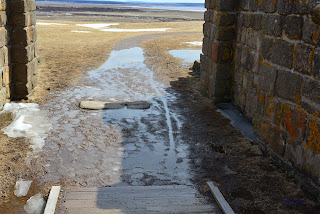 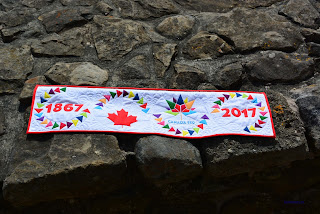 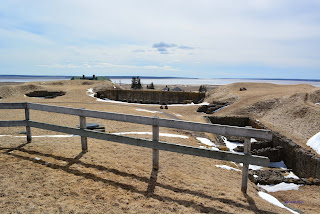 Of about 20 taken, this was the only shot where the banner was not flipped back on itself by the wind! 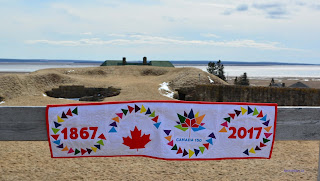 This is my favourite;  it was taken on the cannons, which point out over the Tantramar Marsh towards Fort Lawrence, in Nova Scotia. 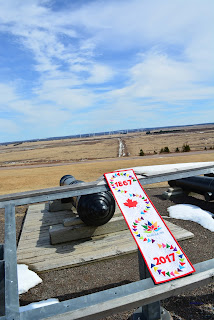 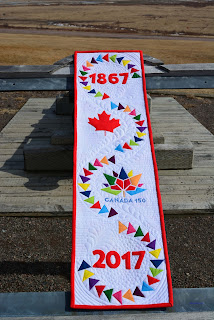 For good measure, we took a few against the clock tower building where Mrs Pugsley's Emporium is housed.  As this building was designed by Dominion architect Thomas Fuller (who also designed the first Parliament Buildings in Ottawa), it is also a fitting backdrop.

At this point, the pattern instructions were finalized and sent to quilt editor Cheryl Coville in Ontario for checking. Once that was done, everything was delivered to Beth at Mrs Pugsley's, who has the patterns professionally printed (not photocopied) in colour, and needed lots of lead time to get her proofs back before the final printing could be done. Beth personally checked and double checked to make sure everything printed to the exact size. She ordered in bolts and bolts of extra fabric to make the kits, and now she and Jackie are busily cutting and packaging.

Each of the shops involved in this program has put a great deal of effort and expense into making this a successful experience. Personally, I had a lot of  fun visiting shops last summer in my travels and checking out their interpretation of the theme. Row By Row kicks off two weeks from today on June 21. You can stop in to pick up this free pattern -or purchase a kit to make it exactly as shown - from Mrs Pugsley's Emporium, 50 Victoria Street E., Amherst, Nova Scotia   It's a great remembrance to mark Canada's special anniversary year.

Email ThisBlogThis!Share to TwitterShare to FacebookShare to Pinterest
Labels: Canada On The Go, Row By Row