One day back in 2006, Diane Shink dropped in for a visit on her way back from P.E.I.  She had been to the Quilt Gallery in O'Leary and spotted their newly arrived "Red Haired Anne" fabrics.  Diane left me with four Fat Quarters and suggested that perhaps I should design a quilt to go with them, as the fabric line had no patterns.  I laughed and said "no thanks" as at that time I was up to my elbows in magazine work and not wanting to take on anything more.  Diane hadn't reached River John by the time I had sketched my design on the computer and called The Quilt Gallery for more fabric!  Here's what I came up with.  I named the quilt Anticipation. 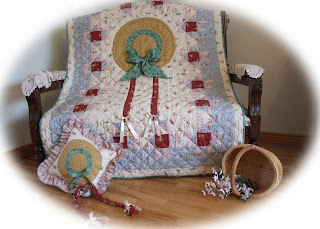 The inspiration was of course Anne's iconic straw hat and red braids. 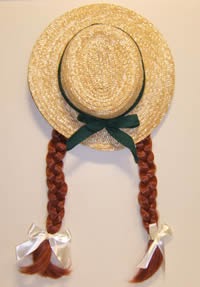 My first version of the quilt was pieced using just the Red Haired Anne line, but I stitched it again using a Maywood Studio print featuring a bed of wildflowers for the golden background. 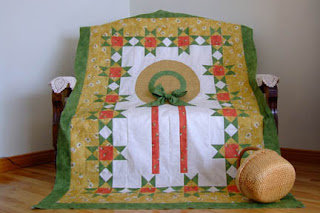 As if designing a pattern isn't complicated enough with getting it tested, copyrighted, printed and packaged this one had the added red tape of needing approval from the Anne of Green Gables Licensing Authority.  Everything to do with Anne is heavily regulated (rightly so) and the quilt needed a nod from the board before the patterns could be sold.   As a lifelong Anne fan, it was a huge thrill to speak with Lucy Maud's granddaughter, who loved the quilt and gave her blessing for the license.  The pattern was popular but it turned out to be a lot of bookkeeping and expense, as in addition to the licence fee there were also royalties to submit.  When the pattern run sold out, I did not reprint.
It was a real treat to receive this picture yesterday from Val of Maple Leaf Quilters.  She has added her own very special touches, making an already feminine design even more so.  I love the treatment of the hat, with the appliquéd flowers and the lace edging on the brim.  Val has also cleverly fringed the ends of the braids and left them hanging free.  Sweet!  You can read more on the construction of Val's quilt here. 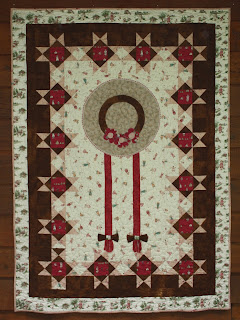 One of the interesting things is that although we think of the Anne series as being for the younger set, Val's quilt will be a gift to an adult friend who grew up loving the Anne books.  My green and gold version of the quilt shown above was commissioned by a woman for her sister in Australia undergoing chemo treatments.  They hadn't seen each other in years, but she remembered the bond they had growing up and reading the Anne books and knew that it would bring comfort.  The bond of kindred spirits never wanes, I guess.  A very sincere thank you, Val;  I hope your friend loves it.  I know I do.
Posted by Karen at 12:42