I am very pleased to learn that my quilt entitled "Simply Stated: A Portrait of Anne as a Young Girl" has been juried into the Kindred Spaces 2008 Textiles Showcase in Charlottetown, PEI. It will be in the 100 Years of Anne category. This should be a huge exhibit, with delegates coming from the Yakohama International Quilt Week in Japan to take in the events, all part of the 100th anniversary celebrations of Lucy Maud Montgomery's Anne of Green Gables. As the name states, my interpretation of the theme is a simple one: Nothing captures the spirit of Anne more clearly or concisely then a straw hat and flying red braids surrounded by a field of flowers. This picture of Anne is set in an old-fashioned gilt oval frame. You can see her 3-D braids flying out from underneath her trademark straw hat. 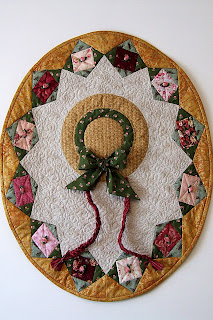 The fabric used for the 'frame' is antique gold Fairy Frost from Michael Miller and has a sheen which resembles gilt. The quilt combines both hand and machine quilting, and has tiny silk rosebuds stitched in the centre of each floral border block. When I am designing, I keep two quotes from Albert Einstein in mind. One is: "simplify, simplify, simplify,..." and the other: "make everything as simple as possible, but no simpler."
"Simply Stated:..." is a derivative of my Anticipation quilt and as copyright holder of that design, I am the only one able to make such a derivative. More on that later. In the meantime, mark your calendars for the dates of the show: September 12 - October 12th, at the Kier Gallery on Victoria Row in Charlottetown, PEI.
Posted by Karen at 07:14